How to get to Heaven 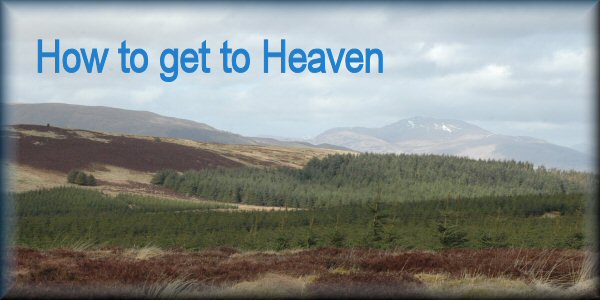 So, you think you have led a good life huh? How sure are you that you will be entering heaven when the day finally comes? Pretty sure? Definitely? Read on.

I'll start by giving you two scenarios. See which person you think will get into heaven.

Andy was a 25-year-old man. He has spent most of his years in and out of the local police station. He was caught stealing a car last week and now he's been sent to jail for three years. He's mugged pensioners for their money, hit his girlfriend about because his tea wasn't ready when he got in from work.... you get the idea.

John was a good man. He worked hard to support his family. He paid his bills on time, didn't swear, didn't go out and get drunk with his friends. He even looked after his elderly grandmother when she was diagnosed with Alzheimer’s for years before she passed away.......

Now, which of these two is going to heaven?

Well, unless you said NEITHER, you are WRONG!

You see, neither of them had accepted Jesus Christ as their personal saviour. They had not asked for forgiveness from their sins. Well, John didn't seem to sin you say? Let me tell you this...each time you think a bad thought about another, it is a sin. A white lie you tell your boss to cover a late coming to work, it’s a sin. We, as humans are born sinners.

Romans 3:23: For all have sinned, and come short of the glory of God

We are thrust into a world filled with sin, and the only way out of it is to drop to your knees and accept that Jesus died so you might be forgiven all your sins. He died so we could have everlasting life with our Heavenly Father.

Romans 5:8: But God commendeth his love toward us, in that, while we were yet sinners, Christ died for us.

Romans 5:9: Much more then, being now justified by his blood, we shall be saved from wrath through him.

Well, this is telling us that we are now justified by the blood of Christ. His blood pouring from his beaten body was the washing away of all our sins. Accept Jesus as your saviour NOW. Nail those sins to that cross with Him. Let all your sins be blotted out by the blood of Christ. Take control of your destiny with the help of our Lord. Make sure YOU spend eternity in Heaven.

Still not convinced. Read On....

Perhaps you feel unloved...no one really cares about you, so why should you bother....

Well, more wrong you could not be, you see, someone does love you. Love you more than anything in the world, loved you so much, that He sent His only Son to die for you, that you might appear perfect before God, therefore be granted eternal life with Him.

John 3:16: For God so loved the world, that he gave his only begotten Son, that whosoever believeth in him should not perish, but have everlasting life.

All you have to do now is get on your knees and pray. Do it now, drop to your knees, and ask Him for this gift. It is in YOUR hands, not His. He will stand at the door and knock, but will not come in uninvited...

Revelation 3:20: Behold, I stand at the door, and knock: if any man hear my voice, and open the door, I will come in to him, and will sup with him, and he with me.

Are you going to accept this gift? A truly free gift, that will be the best thing ever to happen to you. You WILL NOT get into Heaven on works alone. You must have faith!

Ephesians 2:8: For by grace are ye saved through faith; and that not of yourselves: it is the gift of God:

Ephesians 2:9: Not of works, lest any man should boast.

Jesus Christ WILL return to this Earth, to cast Judgement on every man. Anyone not saved will be going to Hell.

Revelation 1:7: Behold, he cometh with clouds; and every eye shall see him, and they also which pierced him: and all kindreds of the earth shall wail because of him. Even so, Amen.

Revelation 20:11: And I saw a great white throne, and him that sat on it, from whose face the earth and the heaven fled away; and there was found no place for them.

Revelation 20:12: And I saw the dead, small and great, stand before God; and the books were opened: and another book was opened, which is the book of life: and the dead were judged out of those things which were written in the books, according to their works.

Revelation 20:14: And death and hell were cast into the lake of fire. This is the second death.

Revelation 20:15: And whosoever was not found written in the book of life was cast into the lake of fire.

No man, woman or child will escape this judgement. You may have heard of the Rapture of the Church? That all who are saved are taken up to be with Him, whilst those left on earth face great tribulation. Accept Jesus now to avoid this tribulation.

1Thessalonians 4:16: For the Lord himself shall descend from heaven with a shout, with the voice of the archangel, and with the trump of God: and the dead in Christ shall rise first:

1Thessalonians 4:17: Then we which are alive and remain shall be caught up together with them in the clouds, to meet the Lord in the air: and so shall we ever be with the Lord.

Think you have plenty time to think about it? Wrong....

If I were unsaved, I for one would not like to be driving in a car in front of an 18-wheeler being driven by a Christian at the time of the rapture!

Here is a guideline for a prayer to say now...

JESUS, I AM A SINNER. I BELIEVE YOU ARE THE SON OF GOD AND DIED FOR MY SINS ON THE CROSS. FORGIVE ALL OF MY SINS. JESUS, I REPENT. I ASK YOU TO HAVE MERCY ON ME, A SINNER, AND COME INTO MY LIFE. GIVE ME YOUR SPIRIT AND YOUR POWER. HELP ME TO FOLLOW AND OBEY YOUR COMMANDMENTS, AND TO LIVE FOR YOU. JESUS, I GIVE YOU MY LIFE. THANK YOU FOR HEARING MY PRAYER. THANK YOU FOR COMING INTO MY LIFE. I ASK IT IN THE NAME OF MY LORD AND SAVIOR, JESUS CHRIST. AMEN.

Do it now before it’s too late!

May the grace of our Lord Jesus Christ be with you all. Amen. (Revelation 22:21)

If you are still not convinced, or even if you are, read this heart-rending story. It will bring tears to your eyes. Sons Blood

If you have just accepted the Lord into your life, email us so that we can rejoice with you!

You may want to read through this page, it offers guidance to the newly saved. OK, Jesus saved me, now what?