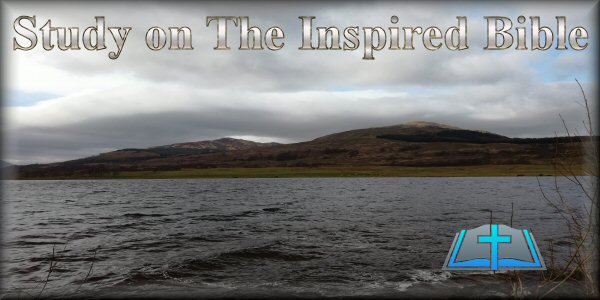 This is a basic study or overview to help you know about our Bible, in that God ordained men to write the books of the Bible through the guidance of the Holy Spirit.

Introduction: The definition of inspired is to breath in.

The Bible was written or spoken by men supernaturally inspired as they were moved by the Holy Spirit, so that their writings were complete, given word by word, and free from all error as no other writings ever have been, or will ever be.

1. Why we need an inspired Bible

His thoughts are above man's understanding.

b. Man is separated from God by sin.

applies to the words written which were given to man. 2 Timothy 3:16

b. The greek word Pheromai means born along.

The men didn't speak their own words, but spoke and wrote as they were moved by the Holy Spirit. 2 Peter 1:21

The Greeks used the word to describe a sailing vessel born along by the winds.

The words that were written down were superintended by God

Plenary means that inspiration was full and complete and extended to all parts of the Bible.

3. What evidence is there for an inspired Bible?

a. Scripture unity is miraculous.

The Bible was written over a period of 1600 years by over 40 separate authors, yet there is no contradictions.

2. The Bible is broken down into new and old testaments

3. There are 39 books in the old testament, and 27 in the New Testament

5. The first 5 books are known as the Pentateuch.

6. The next 12 books are known as the books of history

7. The next 5 are the books of poetry

8. The next 5 are the major prophets

9. The final 12 are the minor prophets

10. There was a period of 400 years silence between the old and new testaments

11. The first 4 books of the new testament are the Gospels

12. The book of Acts deals with the early church

13. The remaining books are called the epistles.

15. The theme of the Old Testament is 'mans unsuccessful attempts to please God through works'

16. The theme of the New Testament is 'the person and work of Jesus who provided salvation

Our goal, by God’s grace, is to love God with all our heart, soul, and mind and to demonstrate that love by obeying His Word.

Our passion is the preaching of the Gospel of Jesus Christ and the teaching of the Word of God verse by verse with expository sermons.