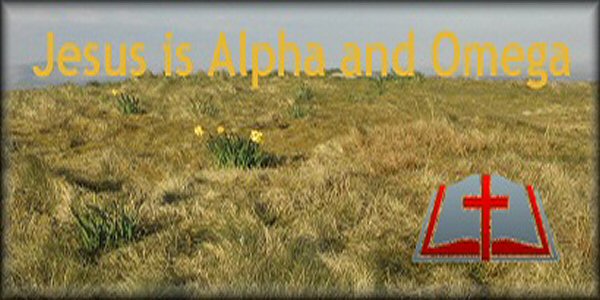 Jesus is Alpha and Omega

What does it mean when Born Again Christians say that Jesus is the Alpha and Omega?

Alpha is the first letter of the Greek alphabet. Omega is the last letter of the Greek alphabet. By combining the two it signifies complete wholeness. In reference to Christ it signifies His completeness and demonstrates Him to be the First and the Last, the Beginning and the End. Unlike other false religions we don't believe that Jesus is merely a prophet or a teacher. He is God incarnate. He was with God in the beginning at creation and will endure with Him for eternity.

In the beginning was the Word, and the Word was with God, and the Word was God. 2 The same was in the beginning with God. 3 All things were made by him; and without him was not any thing made that was made. 4 In him was life; and the life was the light of men. 5 And the light shineth in darkness; and the darkness comprehended it not. 6 There was a man sent from God, whose name was John. 7 The same came for a witness, to bear witness of the Light, that all men through him might believe. 8 He was not that Light, but was sent to bear witness of that Light. 9 That was the true Light, which lighteth every man that cometh into the world. 10 He was in the world, and the world was made by him, and the world knew him not. 11 He came unto his own, and his own received him not. 12 But as many as received him, to them gave he power to become the sons of God, even to them that believe on his name: 13 Which were born, not of blood, nor of the will of the flesh, nor of the will of man, but of God. 14 And the Word was made flesh, and dwelt among us, (and we beheld his glory, the glory as of the only begotten of the Father,) full of grace and truth.

I am Alpha and Omega, the beginning and the ending, saith the Lord, which is, and which was, and which is to come, the Almighty.

And he said unto me, It is done. I am Alpha and Omega, the beginning and the end. I will give unto him that is athirst of the fountain of the water of life freely.

I am Alpha and Omega, the beginning and the end, the first and the last.

Who hath delivered us from the power of darkness, and hath translated us into the kingdom of his dear Son: 14 In whom we have redemption through his blood, even the forgiveness of sins: 15 Who is the image of the invisible God, the firstborn of every creature: 16 For by him were all things created, that are in heaven, and that are in earth, visible and invisible, whether they be thrones, or dominions, or principalities, or powers: all things were created by him, and for him: 17 And he is before all things, and by him all things consist. 18 And he is the head of the body, the church: who is the beginning, the firstborn from the dead; that in all things he might have the preeminence. 19 For it pleased the Father that in him should all fullness dwell;

Jesus answered, If I honour myself, my honour is nothing: it is my Father that honoureth me; of whom ye say, that he is your God: 55 Yet ye have not known him; but I know him: and if I should say, I know him not, I shall be a liar like unto you: but I know him, and keep his saying. 56 Your father Abraham rejoiced to see my day: and he saw it, and was glad. 57 Then said the Jews unto him, Thou art not yet fifty years old, and hast thou seen Abraham? 58 Jesus said unto them, Verily, verily, I say unto you, Before Abraham was, I am. 59 Then took they up stones to cast at him: but Jesus hid himself, and went out of the temple, going through the midst of them, and so passed by.

These words spake Jesus, and lifted up his eyes to heaven, and said, Father, the hour is come; glorify thy Son, that thy Son also may glorify thee: 2 As thou hast given him power over all flesh, that he should give eternal life to as many as thou hast given him. 3 And this is life eternal, that they might know thee the only true God, and Jesus Christ, whom thou hast sent. 4 I have glorified thee on the earth: I have finished the work which thou gavest me to do. 5 And now, O Father, glorify thou me with thine own self with the glory which I had with thee before the world was.

A Prayer of Moses the man of God. LORD, thou hast been our dwelling place in all generations. 2 Before the mountains were brought forth, or ever thou hadst formed the earth and the world, even from everlasting to everlasting, thou art God. 3 Thou turnest man to destruction; and sayest, Return, ye children of men. 4 For a thousand years in thy sight are but as yesterday when it is past, and as a watch in the night. 5 Thou carriest them away as with a flood; they are as a sleep: in the morning they are like grass which groweth up. 6 In the morning it flourisheth, and groweth up; in the evening it is cut down, and withereth. 7 For we are consumed by thine anger, and by thy wrath are we troubled. 8 Thou hast set our iniquities before thee, our secret sins in the light of thy countenance. 9 For all our days are passed away in thy wrath: we spend our years as a tale that is told. 10 The days of our years are threescore years and ten; and if by reason of strength they be fourscore years, yet is their strength labour and sorrow; for it is soon cut off, and we fly away. 11 Who knoweth the power of thine anger? even according to thy fear, so is thy wrath. 12 So teach us to number our days, that we may apply our hearts unto wisdom. 13 Return, O LORD, how long? and let it repent thee concerning thy servants. 14 O satisfy us early with thy mercy; that we may rejoice and be glad all our days. 15 Make us glad according to the days wherein thou hast afflicted us, and the years wherein we have seen evil. 16 Let thy work appear unto thy servants, and thy glory unto their children. 17 And let the beauty of the LORD our God be upon us: and establish thou the work of our hands upon us; yea, the work of our hands establish thou it.

What does this tell us about Jesus:

Jesus is the beginning and the ending, so He knows what will happen. Therefore, we can trust Him and know that whatever He says will happen actually will. Since He was there at the beginning with God and will be there at the end with Him as well, He can be trusted to know the whole picture. Everyone else can only know the past, they cannot see into the future, therefore what they say will happen is not as reliable as Jesus the Alpha and Omega.

Applying this to your life:

Jesus can see the complete picture. When people and circumstances in my life seem unclear I can trust that Jesus knows the way ahead and that whilst I trust in Him there is no need to worry or fear. He was there in the beginning and will endure forever and ever. He is mightier then any man and His knowledge is without limits.

Sorry, we currently have no events.
View All Events